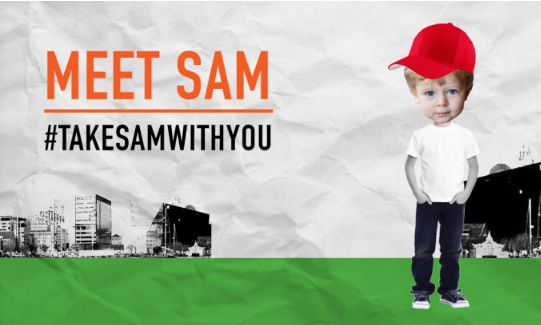 Meet Sam. He eats what many of us would class as a fairly “normal” diet: his parents cook homemade dinners most nights of the week but Sam has a big appetite, so he often has bigger portions than he needs or second helpings. On the whole he’s a good eater, doesn’t mind trying new things and isn’t too fussy – though he does prefer white bread to brown.

Read Sam’s story below or watch it here.

Sam begins life as a good little eater. As a toddler, his typical day’s meals might start with a bowl of hot oat cereal with honey for breakfast, diluted squash drinks through the day, a ham and cheese sandwich for lunch with a handful of curly potato snacks, a digestive biscuit every day as a little treat, a spaghetti bolognese toddler ready meal for dinner and a fruit pudding from a toddler range every other day.

He’s a busy little boy who loves to run around, gets plenty of sleep and watches about an hour of TV each day.

Dr Mary Fewtrell, Professor of Paediatric Nutrition and Honorary Consultant Paediatrician at UCL Great Ormond Street Institute of Child Health, London. Clinical Lead for Nutrition, Royal College of Paediatrics and Child Health: “Sam’s already consuming too much sugar on a typical day. This isn’t good for developing teeth and his dentist finds he already has some signs of tooth decay when he’s taken for a routine check-up”.

By 12, Sam is a little on the heavy side but his parents aren’t too worried – it’s puppy fat, so he’ll grow out of it. After all, he’s pretty active, playing football at school and at the weekends. He does like to spend most evenings on his Xbox.

His typical day starts with a bowl of chocolate flavour toasted rice for breakfast with semi-skimmed milk and two glasses of blackcurrant high-juice squash. For lunch, it’s a cheese sandwich on white bread with grapes, a packet of cheesy puffs crisps and a cereal bar with a fruit juice drink. For tea, he has homemade cottage pie (and seconds) with peas, followed by ice cream for pudding with reduced sugar orange squash. Before bed he has a digestive biscuit and a glass of milk.

Unknowingly, Sam is consuming more than twice the amount of sugar recommended for his age most days, with squash drinks and cereal bars. He sometimes feels tired in class during the afternoon. He finds it hard to concentrate and can get quite irritable.  His parents think he’s just becoming a “moody teenager.”

Dr Fewtrell:  “Eating more calories than Sam needs, even just a small amount extra per day, is gradually leading him to put on excess body fat. Eating sugary foods and drinks also leads to his blood sugar swinging – immediately after eating the blood sugar increases, so his body produces insulin leading to a drop in blood sugar which makes him tired and feeling that he needs to eat more sugar. Consuming too much sugar may already be putting his pancreas under strain as it’s having to produce more insulin to deal with the sugar: at this age, his body can cope, but it may lead to problems later on.”

Sam is still fairly active and plays five-a-side football as a way to socialize and de-stress in the evenings after work.  However, he’s still got his “big appetite” and often has large portions. He has a beer every other night and sometimes more on weekends if he’s with friends. He doesn’t think he drinks particularly heavily so doesn’t really take into account the extra calories. He does worry that he’s not as fit as he used to be and decides he’s going to start opting for “low fat” foods in the supermarket. Sam unknowingly starts eating too much sugar because the low fat foods often add sugar to replace the fat.

Dr Fewtrell: “Sam’s continuing to put on more body fat, and his pancreas is still under strain. His body is storing up problems for the future because of the way he’s eating and drinking – even though it’s clear he’s thinking about his fitness and what he eats.”

Sam is now carrying a few extra stone than he was in his twenties and is now classified as overweight.  He’s stopped being as active because of the demands of his busy job and family life. He’s developed a bit of sweet tooth and likes to “treat” himself with chocolate bars and cake. He doesn’t realize how many extra calories this is adding up to and thinks he’s ok because he doesn’t drink as much these days, and tries to control his portion sizes.

Dr Fewtrell: “During a routine doctor’s appointment, Sam’s GP mentions that he’s significantly overweight and gives him some advice on diet and exercise. He checks Tom’s blood sugar to see whether he’s developed Type 2 diabetes – he’s ok at the moment, but his blood pressure is on the high side, putting him at greater risk of having a heart attack or stroke.”

Sam knows he’s been carrying some extra weight and tried power-walking to try and shift it. But he’s been feeling particularly tired and thirsty, and he’s up a lot in the night to go to the toilet. Sam decides to go the doctor for a check up…

Dr Fewtrell: “This time, the blood test tells an even more frightening story. He’s developed Type 2 diabetes, which means he’ll now have to remember to take medication at regular times, eat more healthily and do more physical activity. Sam’s worried about how he’s going to do this, as his knees have been getting painful as the weight’s piled on.”

Sam’s diabetes has stayed under control, thanks to his medication, but he’s really struggling to lose any more weight. He’s feeling quite depressed about his health – he’s in the car for much of the day with his job so he’s not very active, feels reliant on what’s on sale at the motorway services for lunch and can’t see how things are going to change.

Dr Fewtrell: “Sam’s dad had heart disease and during the course of Sam’s visits to the doctor to monitor his weight and diabetes, the doctor’s becoming increasingly worried about Sam’s cholesterol levels.  We all need cholesterol in our bodies to be healthy, but only at certain levels – Sam’s diet is making his cholesterol level too high. That means cholesterol may be building up in the blood vessels which carry blood and oxygen to his heart, so there’s less space for the blood to get through. The doctor prescribes statins to help prevent cholesterol from forming and reduce his risk of a heart attack.”

Sam’s keen to retire soon and spend a bit more time with his grandchildren, which is spurring him on to lose more weight. As well as continuing his treatment for high cholesterol and Type 2 diabetes, he’s been diagnosed with bowel cancer – one of the most common cancers in the UK and one of the cancers with more UK cases linked to being overweight or obese1.

Dr Fewtrell: Fortunately, Sam’s cancer was detected early and he is told he should make a full recovery after treatment. He is given advice and support by his cancer care team on the importance of a healthy lifestyle and realizes that it’s now even more important that he makes a serious effort to lose weight, improve his diet and be more physically active if he wants to enjoy a healthy and long retirement.

Looking back, Sam can see how the seeds are sown in childhood for the way we eat for life: